Frida Kahlo : Painful colors of hope – A tribute to one of the greatest mexican artists

Today has no date, the day exists and since the beginning of my trip in Mexico I’ve been writing and reading,  meeting people and understanding things.

Among those things, among these new ideas settling in this peculiar baffling momentum, I seek guides and I find angels. Among these angels, these artists-landmarks that I keep close to me, I hold Frida Khalo.

The more I think about her work, visualizing it, studying it more closely the more I’m inspired. I want to start by writing on the canvas Las dos Fridas, painted by her fire-animated hand. This paint hightlights this wild and mystical soul that was Frida.

In 1939, when she produced this work – today one of the most visited at the Museum of Modern Art in Mexico City – Frida was already a recognized painter, a communist comrade and a rebel in a world which was not ready for her. During her lifetime, she offered her ideas, made discoveries in color, form and spirit, all of which move in her paintings through smoke, in dark gazes and symbols, of all kinds.

The repetition for the affirmation, the self-portrait to understand, to seize in the fleeting glance or an open door all the  women in us.

When I began this text it was just after February 29, 2020. A day full of shame, the day after the designation of Roman Polanski, a multi-recidivist child molester and sex offender as best director for the Académie des Césars in France. A sad day and my heart was bleeding.

In the middle of this stream of red and blue tears, a light appears and in Frida that day I saw an immense hope lodged in the heart of her brushstrokes, in her judiciously chosen words, in her non-smiles so beautiful, so calm, so deep.

In the two Frida who hold hands, I also saw myself, loving and enraged, woman and writer, possessed by an immense life force which is perceived sometimes fragmented, broken, happy and bright often or even mean, inconsiderate, shallow or selfish. In this woman who exists in me, in the carnal envelope and oh how vulnerable of my body, there are several energies, several movements which are drawn and repelled by one another constantly.

Frida, when she paints this duality tells us about all these other women who vibrate in our veins, who tie their hearts to each other. In this sense, in those hands held, we form only one soul, collective. We create through open recognition of the multiple aspect of the self a necessary recognition by humans together, whatever the color of the sky or the content of the day, holding hands, strongly tied and united.

Frida stands  there looking at us with her big dark eyes and in all the photographs of her that I see, I feel her vibration pulsing inside and outside, like mine, like so many women I know and so many beings that I see every day. This fierce desire for living can be seen the eyes that meet and smile, recognize without words their existence here and now.

Frida, we can never say it enough, was a starborn creator and still is one of the greatest artists of our changing present-future. She was one of those whose work was not recognized enough during their lifetime and still not enough today, or least not enough for the substance of her words, the density of what she brought to light, for what she told us about her world and what we can understand through her eyes of what is happening today, in 2020.

Did you know that only one solo exhibition of Frida took place, some time before her death?  The night was organized by her friend Lola Álvarez Bravo at the Galería de Arte Moderno in 1953, one year before she died. Frida went there all dressed up though exhausted, lying on a bed placed that was solemnly placed in the middle of the room. She was there, present, melancholic, proud and happy to see her friends and her works united in a legitimate tribute to her monumental work. Frida was a raw  and free spirit , animal, aware of her human fragility and of the surrounding world of nature protecting us from the cruel torments that humans have built in the forms of systems and norms.

Frida Khalo, in thirty years of painting, told us about societies, molds, rules, masks that prevent us from freedom, suffocating us, keeping us well in our places and that we fear to move away from. Fear, Frida, my sister, you helped me to understand it, you helped me in seeing its steel peaks go through my chest and make my tears flow on my cheeks. It is love I believe now you were telling us all along. 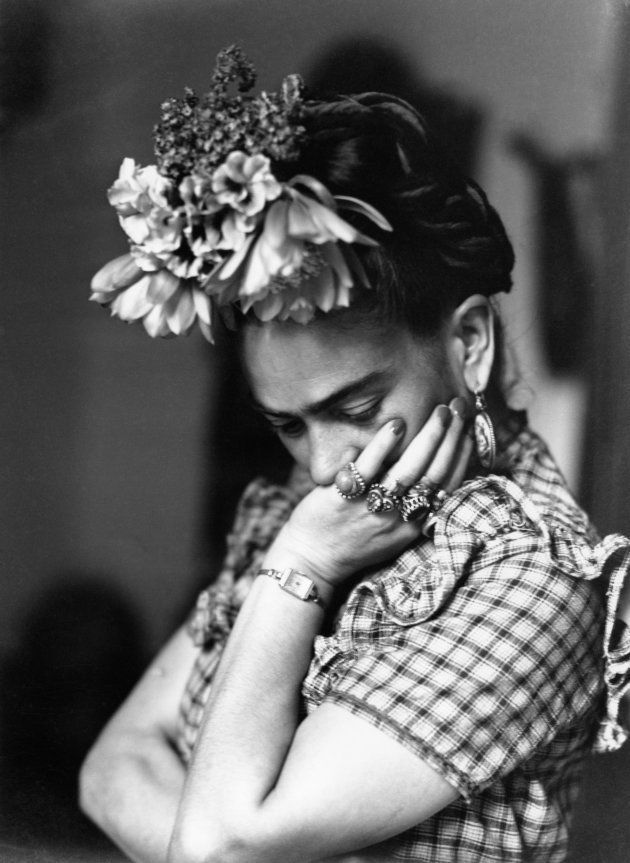 The shapes and symbols of Frida inspired me to read more, to understand more, to speak up differently, to make these days to come days of wisdom. Me, woman, artist, revolutionary at heart, I come today and I hear the sound of her voice and I hear the prophecies, those of fascism and that of Art, that of eternal surrealism, which comes back to us all as an ideal. I rejoin today Frida’s wish to go beyond the rules of reality, to exceed them, to twist them if we dare… Some will give this credit to Dali, others to Breton, or Basquiat in later times. Personally, I am more Aragon or new wave cinema but today, the colors of Frida do not submit to any category, they transcend the spectrum and lodge themselves right in my heart. The colors of Frida, her strength, her will for an open speech awakens our visual memory as well as our collective consciousness.

She tells us about Mexico, the blood of its people which has flowed and which is still flowing, its pains, its doubts, its amorous perditions and its vulnerability. She paints on sisterhood, womanness and unity in soul and honesty. Frida’s painting were, as her, unafraid to be herself, unapologetically intensely alive throught a life of feeling everything, all the time, despite horror and despite ideas. She felt, and she kept going, creating and loving, ever, in and out of life itself.

Whilst observing her work and understanding her life a little better, I live my own path and I understand that woman, human, artist, I cannot hide from the darkest aspects of myself in art. I cannot escape the deepest desires my soul craves in order to extend in peace and in the light. I learn between the faces that she painted not to suppress my instincts, to let go and align my actions to my ideas. Through her life of love and sexual freedom, as a bisexual woman and a feminist, she taught me to stand up for myself and not confuse love and interest.

From Frida’s pain and work, a new bridge has emerged, she made visible the innate fusion existing in these two elements. Her paintings convey simultaneously the immense loneliness she felt and the acute sense of self she shared with her fellow artists, friends and family members. In the still lives that Frida produced, she managed to give life to the metaphorical zombie that is the new world order. Thanks to pigments and brushstrokes, she depicted the already alienated industrial world we are living in today. In the bodies of dying and drowning women, Frida evoked, I believe, the decrepitude of humanity concentrated on the quest for capital at the expense of a consideration of natural life, embodied by women, our bodies and our wombs. Because she was hindered, injured, injured, betrayed, abandoned over the course of her life by fate first, institutions too, disappointed in love sometimes, Frida, an eternal optimist with critical and precise talent, was painting things how they were in her own mythical world.

Her gaze, clouded by great lucidity, pierces her paintings when she paints the roots of medicinal plants beneath the foundations of the Empire State Building, draining in its own waters of guilt and murder. In her latest paintings, Frida strived to create links between the chaotic elements of torn worlds to make sense of the intrinsic chemistry of our lives, overlapping worlds, realities reflected in our choices, in our creations, in our visions of ourselves biased by self-hatred and denial of the dreamer in us …

In her life, Frida explored, traveled, she met the influential artists of her time and gave her opinion on the conflicts that were tearing her era apart. Frida spoke to us and still speaks to us of courage in the arts, of commitment, of passion. Throughout the display of her colors, she speaks to us of an unlimited joy that can be found in a form of conscious contemplation, an expression of the self freed from the shackles of fear and innumerable diktats of what must and mustn’t be…

Frida, in all her splendor was a living woman, animated by an impetus of inalienable creation. I dedicate this text to her as well as to all the women artists that I know and that I don’t know, to all the sensitive souls for whom to create, express themselves, breathe in the sincere experience that life offers them is the only option: your strengths are powerful, your breaths of life are already vibrating and mixing in the global flow, I see you and I love you. Let’s go on, let’s go there together, let’s listen to each other.

Une réponse à “Frida Kahlo : Painful colors of hope – A tribute to one of the greatest mexican artists”